Beijing, as the capital of the People's Republic of China, is the country's political, cultural, international communication and scientific & technological innovation center. Nestled on the north of the North China Plain, Beijing borders Tianjin City on the east and Hebei Province in all other directions. The total area of Beijing is 16,410.54 square kilometers, surrounded by mountains to its west, north and northeast. With a long history and splendid culture, Beijing houses the most world cultural heritage in the world. This splendid city has been acclaimed as a land of peace and prosperity since ancient time. In its long-term process of development, numerous places of interest have emerged. These include the Forbidden City, Temple of Heaven, Summer Palace, Great Wall, Tian'anmen Square, Nanluogu Xiang.

Beijing has a temperate, continental monsoonal climate, characterized by short spring and autumns. The short autumn is a lovely time in Beijing. The air is crisp and good for people to go to the mountains to enjoy the colors and the natural beauty. Here list some hottest places worth your visit. 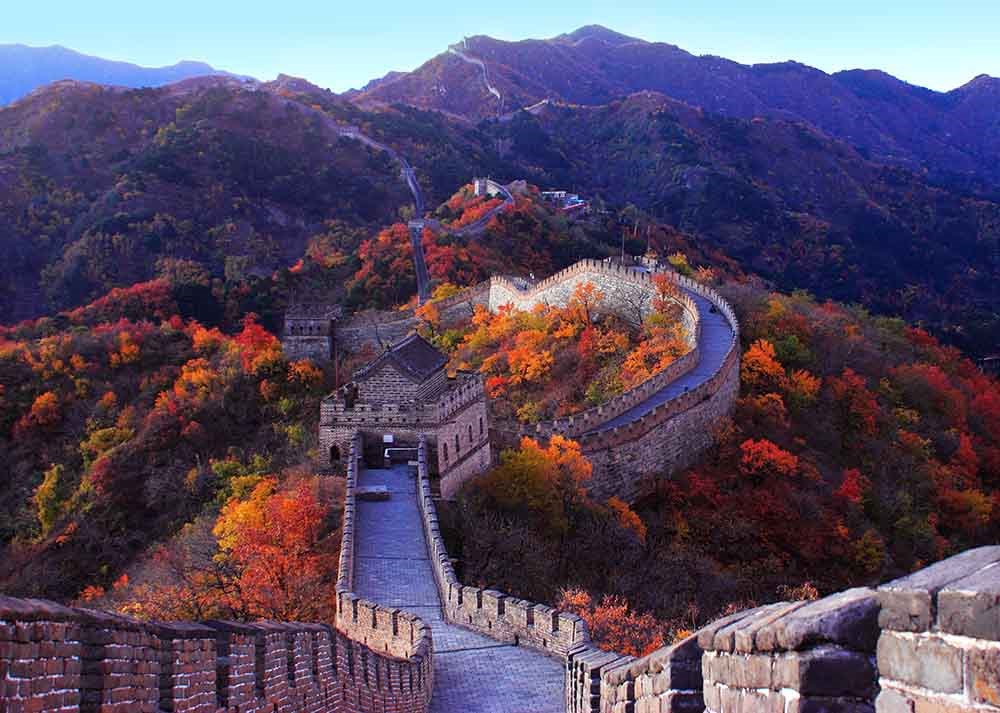 This image is from the Mutianyu Great Wall official website. If there is copyright infringement, please contact us to delete it.

GreenChina2019 delegates are free to join half day tour to Mutianyu Great Wall on 19th October 2019.

With a history of about 2,700 years, the Great Wall is one of the greatest wonders of the world, listed as a World Heritage in 1987. Just like a gigantic dragon, it winds up and down across deserts, grasslands, mountains and plateaus, stretching approximately 21,196 kilometers from east to west of China. Today, some sections of the Great Wall are in ruins or have disappeared. The Badaling and Mutianyu Great Wall are the most famous and best preserved sections.

This image is from the Forbidden City official website. If there is copyright infringement, please contact us to delete it.

Forbidden City, also known as the Palace Museum, lies at the city center of Beijing, and once served as the imperial palace for 24 emperors during the Ming and Qing Dynasties (1368 - 1911). It was first built throughout 14 years during the reign of Emperor Chengzu in the Ming Dynasty (1368-1644) and it's the world’s largest palace complex and covers 74 hectares. Ancient Chinese Astronomers believed that the Purple Star (Polaris) was in the center of heaven and the Heavenly Emperor lived in the Purple Palace. The Palace for the emperor on earth was so called the Purple City. It was forbidden to enter without special permission of the emperor. Hence its name 'The Purple Forbidden City', usually 'The Forbidden City' and today known as the Palace Museum, to the north of Tian'anmen Square.

This image is from the Beijing Government official website. If there is copyright infringement, please contact us to delete it.

As one of the largest public squares in the world and Tiananmen Square is located in the center of the city. The square contains the Monument to the People's Heroes, the Great Hall of the People, the National Museum of China, and the Mausoleum of Mao Zedong. On the northern side of the Square across Chang'an Avenue stands the almost 34m high Tian'anmen Tower. For visitors, it is recommended to walk from Qianmen district from the south to the square. In the evening the Square offers a good option for amazing photos.

This image is from the Summer Palace official website. If there is copyright infringement, please contact us to delete it.

The Summer Palace landscape, dominated mainly by Longevity Hill and Kunming Lake, covers an area of 2.9 square kilometers, three quarters of which is under water. Its 70,000 square meters of building space features a variety of palaces, gardens and other ancient-style architectural structures. Well known for its large and priceless collection of cultural relics, it was among the first group of historical and cultural heritage sites in China to be placed under special state protection.

This image is from the Beijing Government official website. If there is copyright infringement, please contact us to delete it.

Beijing Zoo covered an area of over 40,000 square meters and houses over 7,000 creatures of 600 different species which including the giant panda, red-crowned crane and deer -all unique to China - as well as the African giraffe, rhinoceros, chimpanzee and antelope; the wild ox from Europe and the elephant and gibbon from India.